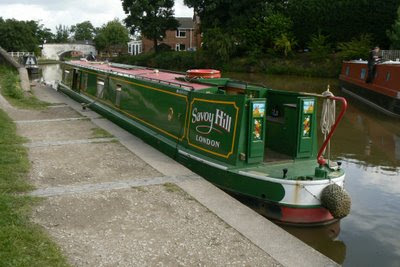 I went for a wander around Middlewich before leaving - looked in the chandlers for a new front fender (mine is working fine, just has bits of rope hanging off and tyre exposed), but decided I can leave vanity purchases for another time. I did spot 'Savoy Hill' at the water point, though - the BBC Club boat - the only BBC connected person seemed to be Roger Stockton, who took redundancy some years ago and now is Southwark Council's cycling officer. More sadly I also spotted Felus Cattus III, the former home of the late Mike Stevens.

At Bliss had already left by the time I got back to the boat, but at the first lock I met Andante, 38', and I don't think I got a windlass out in anger until much later in the day. Caught up with Bliss at Cholmondston lock, who offered to share with me but had to have a comedy rejection moment when I pointed out my new partner... ;-)

At Barbridge junction there were lots of moored boats I followed andante through, a boat pulled out in front of me, kept going to left causing delays when met other boats, eventually rammed left side of canal & I passed them; Andante had waited for me at first of Hurleston locks. It turns out that they hadn't even pulled out of their own mooring in front of me, but had been doing similar antics in front of Andante - the kid was trying to fish straight off the side, at at one point when I was ahead of them the two adults seemed to be trying to see how much they could make the boat rock. It was good to be away from them, anyway.

Also went past yet another new marina being built: 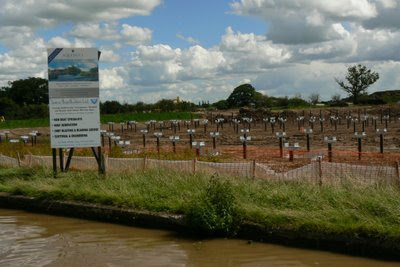 I don't like marinas - I could have moored in the BW one here - but I do see that with more and more boats on the canals, they need to put them somewhere. I'm lucky that my home mooring isn't one, and also that I'm generally curious enough about other boats to not mind crawling past on-line moorings. Oh well. I could insert a rant about people preferring to build new boats than preserve older ones, too, but another time...

Somewhere along the way I spotted NB Marmaduke who I'd found via some mutual links and spotted were doing a similarish trip - I'd left them a couple of comments, but they weren't around so I couldn't say hello...

Do you have BBC connections then?

As someone who's just starting a night shift at TVC, leave (even unpaid) sounds like an excellent idea!

ah, my fate had I not persuaded my boss I knew nothing about the sport studio (as an engineer). Subtitles, network or BIP? Or even something else...?