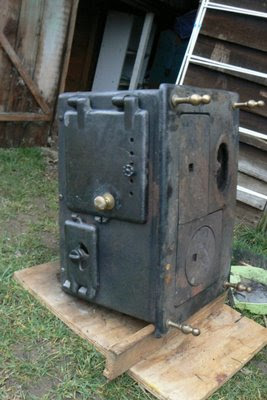 Blogs are marvellous things, and a little cheek can get you a long way - a comment left on Geoff's blog about forthcoming work on Lady Elgar has resulted in a new home for the Epping stove from their boatman's cabin, a tiny range, which I'm looking forward greatly to trying to cook on - expect reports on Fud at some point in the future, although with a new flue needed and BSC to work towards, installation (or should I say replacement - I don't need two heaters in an 18' long cabin) may not happen until the summer or autumn. Geoff is a very kind man, and I hope to be able to repay him in some way.

By the way, 'Fud' is a collaborative blog about cooking good, simple, ethical food, suited to boats or even gathered from the countryside nearby - if anyone wants to contribute, please get in touch.
No comments:

Space being tight, the domestic electricity distribution is squeezed in under the gunwhale behind the back door. I'd been looking out for a suitable blank box to mount everything in, when using standard double gang surface boxes occured to me - ready made to the right width, modular, and easily replaceable.

The upper blank panel will hold a current/voltage metering, although it may be easier to put the switch panel as the upper one.

The switches themselves are 12v illuminated rocker switches, rated at 20A. Previously I'd discovered these are actually SPDT changeover switches, as when 'off' they short the output to ground - if ground is connected to illuminate the switch. I'll be using this for the fridge circuit, to switch it between a direct connection, or via a relay connected across the charge warning light, along with the split charge relay. The breakers are small thermal types, all 10A bar the lighting circuit which is 5A. Small boat, simple needs, thankfully - the circuits are water, aux (cig lighter sockets & radio/telly), fridge, lights, and charger.

Note the plastic tank connector acting as a bush as the cables pass through the bulkhead into the engine space. On the other side (actually under the back door step) there's a sheet of ply, holding the other electrical services - master switches, relays etc.

Meanwhile I've just bought myself big crimpers (not huge, biggest size of wire they'll take is 16mm2, but that should be enough for the split charge relay) and crimp terminals to sort out various outstanding bits. A colleague pointed out I didn't have enough hair to crimp...
No comments:

After all the stuff we've had about removal of the motorbike gates for disabled access, and the resultant kids on motorbikes (and postcards for BW) - it made a refreshing change to see someone in a wheelchair on the towpath - certainly the first time I've seen one.

I'm not sure if he was with the cyclists visible ahead or whether they'd all just passed him - but they would all have had fun getting through the fishing compeition also going on, visible far right.
No comments:

Firstly, Halfie asks how I'm doing with my time lapse camera; to be honest, haven't done anything much, apart from wish I'd had it last summer. ;-) The aim is to mount it in a relatively secure & weatherproof box, with access to a 12v supply, so basically it can be started every morning on a cruise and left all day. It's more or less in one small box what I've been meaning to build for myself for years.

Poking around blogs (via Lucky Duck, I think, this one), I found Robin of NB Uisce posting videos made up from webcam images recorded by a laptop, assembled into a video file afterwards. A more complicated setup, but notable from the fundamental point that the viewpoint is from the back fo the boat, the way the steerer sees the world anyway. I'd been working on a clear view of the canal, from the bow (what I suspect the Waterway Routes videos do), although I did quite like the test run on NB Alnwick, that had a little of the prow in shot. So food for thought, there. Also noting that Uisce and Waterway Routes are both boats with electric propulsion - yes, back to that again... ;-)

I also wanted to note that I got to have dinner with Keith & Tim from NB Floss, who I met properly at Calcutt locks, but we seem to have more or less followed the same route around the country at more or less the same time, and being more observant than me must have spotted a daft little red boat here and there. No link, as they keep some kind of 'log' on 'paper' - who knew that was possible? ;-) I still maintain this blog is mainly for me, I'll lose a notebook easily enough, more easily than I'm likely to break the entire internet. Next time I'll blag a look around FLoss, and their famous gardner engine. Actually, if I did go electric I could have great fun recording various old engines, and playing them in through the boat back deck sound system (yet to be properly installed) when passing impressible boaters. It's a thought, albeit a daft one.

Tortoise deserves a paragraph, at least; I'm finally replacing the original fuse distribution with a neat circuit breaker & switch systen, mounted into a double gang electrical socket pattress plate; a second one will hold metering - more to come, and pictures, in another post. Plan for first half of the year is blacking in March, then getting ready for an initial BSC inspection at the start of May, giving me two months to get things right before I expire in July. Thankfully High Line do the second inspection for free, unlike whoever Carrie is using... ;-( Also I'm booked in for Little Venice again on May Day bank holiday, hopefully sheperding along Catherine & Will on Benbulben, along with the rest of the High Line convoy; PMR radios, chaps?

And finally, I've even splashed out on doing some work on the house - insulating under the front room floor, which has made a huge difference to the temperature (and temperature gradient) of the room. The newish woodstove is doing sterling service on evenings in, burning slowly on larger pices of wood and pumping out the heat with thinner pieces of wood. There's three loft conversions going on locally at the moment, yielding lovely old roof supports & joists, and in one case some strips of oak that will come in very useful on Tortoise. I've got enough Kingspan left to do the rest of the ground floor, currently sitting under a tarp (and snow, at the moment) in the garden. I just need to make the time to pull up the floor in the hallway & back room...
8 comments: