While on our trip on the Leighton Buzzard Light railway, I spotted a map showing the original scope of the line: 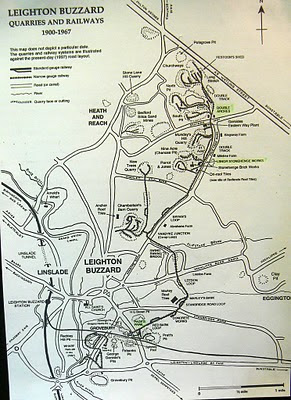 Looking closer, yes, there's the short section of rail on a wharf by the canal that's long made me curious: 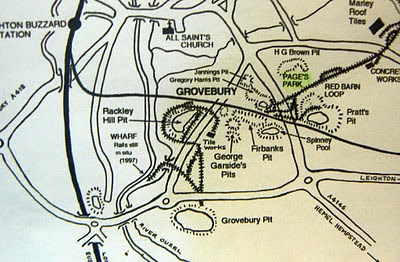 It looks like this little bit of line was separate to the currently running stretch, could well have been a separate company, even. The remains of industry fascinate me, especially when largely forgotten; it would be great to try to search out other remains of this second line, but for the mean time I can only look at maps online: 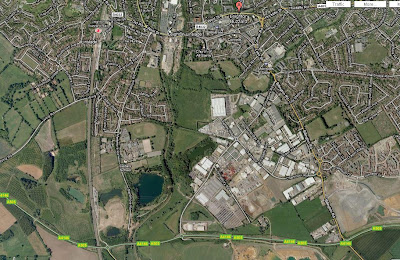 The route of the standard gauge brach is clearly visible; by it's very nature, 'light' railway was pretty much emphemeral and made less of an impact on the land.

Edited to add - Carrie's sent me a picture of the wharf itself, looking pretty much ready for a few trucks to be rolled in: 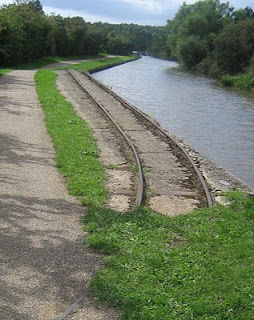 the best pub in the world

I've a few posts yet to make, when I have time; one is actually quite exciting, at least to me. But this time I want to write about a pub - I see Carrie's beaten me to it, but my picture is ever so slightly different (but only just) ;-) 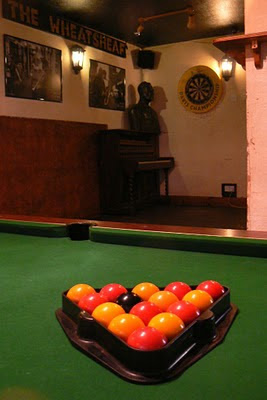 Back in my wayward musician days we played in Leighton Buzzard a few times, and I've been up from London to see friends play at least once. We approached the Wheatsheaf with trepidation (well, I did) - had they decorated? become a gastropub? Worse still, repaired - or even tuned - the piano?

Thankfully not - they even still have the same old 'Dynamix' PA speakers on the wall (we used them once, after they told us they had their own PA - we used mine next time). The piano is as random as ever (and I didn't get thrown out for attempting 'Dingle Regatta' on it), the jukebox as good as ever (although Freebird seemed ever so short), and the company was perfect. We tend to approach pool as a game of chance rather than skill, which at least means we get out money's worth.

It's a kind of bikery local, really, still with lots of live music. It's more of a walk from the canal than some might prefer (top of high st, turn left into North St), but for a lazy wet Saturday afternoon, I doubt you'll find better.
No comments: 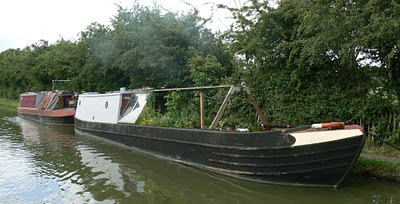 Spotted on the way out of Milton Keynes - I like the conservatory section especially. Here's the second one close up - not fussed about the tug deck setup, but the spare bits of steel on the cloths made my day. ;-)

Farewell to all that

I'm writing this back on the home moorings on the Slough arm, after a run down from Kings Langley, and a day from Cowroast to Kings Langley last week.

In a fit of optimism earlier in the year, I thought I'd have time for a gentle meander up to the midlands and back over the summer in the odd long weekend. Work had other ideas, and even I have limited energy... hence the quick run back. A boat should be a gentle pleasure, not a contractual obligation to be moved every two weeks, and I look forward to when I have more time, for the boat, as well as hopefully more iminently, myself and those I hold close. Plenty of pictures & stuff to come, but an interchange from yesterday:

Although I'd cite this as just how bloody stupid some people are, it can be more charitably used to illustrate what a unique science single handed boating is, only really known to those who have tried it. It's like so many things - it's rare for people to see things from the other side, see the other person's point of view. We can but aspire.
2 comments:

It's on as I type, but it's worth saying that Radio 4 are currently repeating Cabin Pressure, a classic, perfectly formed four-hander sitcom. I hope the rumours of a third series are true - Roger Allam as the disgraced ex-captain who actually sounds like a captain, and Benedict Cumberbatch ('Sherlock' to you) as the actual captain, Stephanie Cole as the boss as John Finnemore writing & playing the brilliantly dim cabin boy.
No comments: