(click pic for bigger version)
I went back to Ealing Library to retake a pic of this ad, as previously blogged. I'm not sure all three were regular ways to get tea from Brentford to Greenford, but you can admittedly get there by all three methods...

Bonus pic, also from the exhibition - the Brentford Dock area in it's industrial mode - the Brent/GU mouth is to the right of this picture, Thames Lock is centre top. Sorry about the reflections in this one: 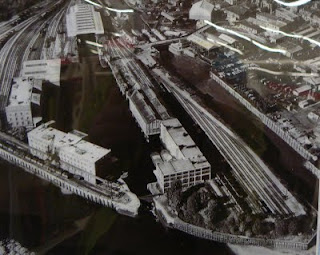 There's a great aerial view of Brentford by the pool table in the Brewery Tap - I really must grab a copy of that one day, as well.
3 comments:

My last ever post on Canalworld Forums, I recall, was suggesting that if electrical kit sold for car use (in the context of radio, tv etc) was used on a boat there'd be no need to worry about overvoltage when the engine was running, in response to the original question. This was responded to by one of the resident gadget-obsessed trolls 'experts' that I should 'bugger off and get myself an education'. At this point I quietly considered my bachelor's & master's degrees in electronic engineering, and twenty years as a broadcast engineer, and decided the education I should get myself is not not bother with that particular website*.

Anyway, this is vaguely relevant as I've been building regulators, to prevent equipment being damaged by a battery charging voltage. Not for me, of course a friend on a liveaboard installed lots of nice LED lights (more or less MR16s in a custom flush mount fitting, hence designed fr a regulated 12v supply rather than a constant current supply) two years ago, and they've largely failed, due to being exposed to nigh volages from a constantly running charger. A temporary solution was a 7812 regulator meant it was safe to fit replacements, which to be fair ran happily (and brightly) on the resulting 11.5v, as said IC does introduce a significant voltage drop, well over a volt. For a tiny load it's hardly worth buying in a switch mode regulator, but a quick search found me this article about the LM2940 type regulator (that only drops 0.5v) on the very useful Renewable Energy UK site. They're only rated for a 1A current, If I needed more I guess I could do something with MOSFETs instead - if I needed to... ;-) 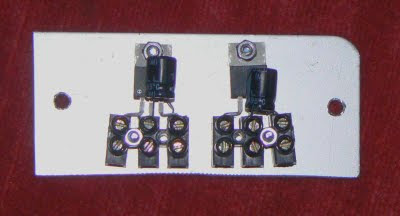 Needing only two components per circuit, I twisted & soldered the legs together, and mounted them straight into 3A terminal block, then bolted the whole lot to be bit of aluminium (heatsink tags handily connected to ground, needing no pesky insulation kits). Heat generation is pretty minimal, but will be monitored. The volt drop is pretty impressive - with a 12.3v battery it still managed 11.96v - the 7812 would have been barely over 11v.

I've built myself one too, just in case, but I haven't needed it yet. Even domestic kit that happens to have a 12v power supply is often fine on a boat - if supplied with an unregulated power supply, it'll be faced with voltages of up to 17v off full load. I'm happy to look inside kit and see if the power goes straight into am internal regulator IC anyway, but of course there are times when it's better to be safe than sorry. ;-)

* I must admit that many people are there are perfectly respectable individuals (and may even know what they're talking about - Tony Brooks posts there, after all), but surely it's a function of true wisdom that there is always more to be learned, so those who think they know everything are stupid indeed. Another favourite incident was where I advised that a new 12v spur should be fused if run straight from the battery - I was then told off for perpetuating the 'myth that fuses stop fires'. If only I'd suggested that he short out all his fuses on his undoubtedly immaculate boat, then say, short out the cabling at his water pump (probably the other end of the boat to the batteries), and then see what happened, just to prove himself right. I could continue...
4 comments: 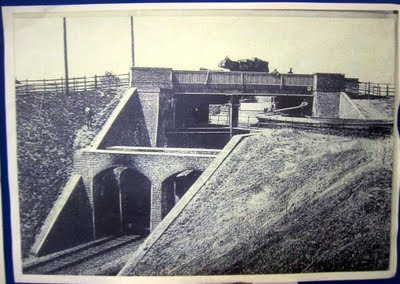 Some time ago I mentioned the 150th anniversary of the opening of the Brentford Dock river/railway interchange (now covered in flats, of course). It's inevitably therefore the 150th anniversary of the connecting branch line from Southall to Brentford. Southall Railway Centre put together a small display of pictures and articles about the line; for a while it was in Brentford's Musical Museum - but they charge entrance, and I'd already seen their wurlitzers & musical boxes - but now, until the end of the month, it's in the more accessible Ealing Library. This line of course runs pretty closely with the grand union down to Brentford, cross at Brunel's 'Three Bridges' construction pictured above. They have a better picture, a Lyons Tea advert showing all three modes of transport with Lyons branded loads, but the little digital I had with me failed to get a sharp version of that one.

Also of interest was the viaduct that carries the 'Hounslow and Metropolitan Railway' - now the Picadilly - lines over the canal & Brentford branch - they had both an early picture (there's a lot more trees etc now) and a diagram from an engineering magazine: 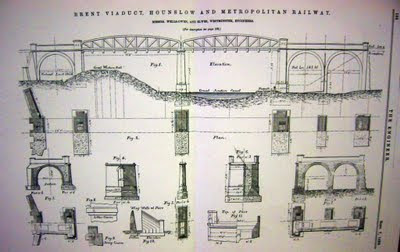 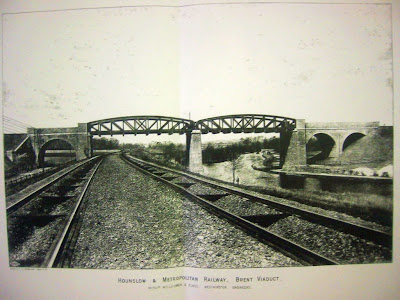 My first foray into buying a boat involved a 44' wooden topped monstrosity on the Lee. The unofficial survey verdict was '5mm pitting on a 4mm hull' and I was happy to not buy it. The vendor was in dire financial straights and didn't have the fuel to get back to the other side of London after the survey; he gratefully accepted the folding cash in my pocket for his old Rutland 500 wind gen, sitting unused and in an unknown state.

It's hung on the wall in my back room since (unstandably, High Line, being a residential mooring with boats breasted up, aren't keen on the wind gen vibrations being passed through the hull to adjoining boats).

It's a little 18W generator, long since upgraded and replaced, but worth sorting, hopefully to be loaned to a deserving home.

The internal rectifiers are covered by a nose cone, or rather weren't, as it was missing. I called up Marlec, who not only emailed me copies of the manuals, but are putting a replacement nose cone - a long obselete spare part - for me in the post, for nothing. What a lovely gesture - thank you, Angela.
No comments: