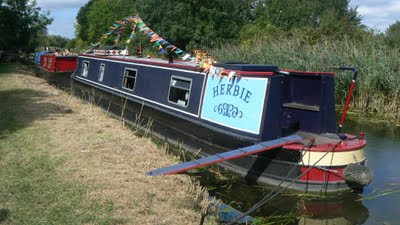 Tortoise (undecorated) tucked in behind Herbie (very much more decorated) after they'd saved me a slot for the Slough festival. You can see how far out from the bank Herbie had to moor - what you can't is how much closer in a v-bottom boat can get. ;-) 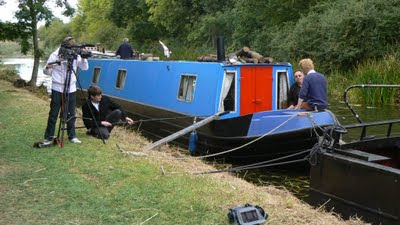 Phil's boat Becky was just behind me, so I got to watch him being interviewed for livingaboard.tv, although their website cunningly doesn't actually explain how anyone might actually get to see the results.

(ha - I've just spotted Herbie in the background - they didn't want to interview us as we weren't liveaboards, but obviously Neil was determined to get in somehow...)

I also had a nice poke around Ricksmanworth Waterways Trust's 1936 boar Roger's boatman's cabin, although without a fisheye lens the pictures aren't worth posting. It's a fascinating space, though. I must admit I'm vicariously enjoying Sarah's blogging about Chertsey's. I suspect it's all psychological, as a boatman's cabin makes the interior of Tortoise seem postively palacial... ;-)
No comments:

Don't know about anyone else, but I'm getting bored of just text, so to make amends: 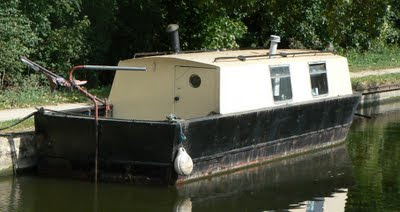 This type of springer (pretty sure it's a springer) is the closest I've seen to a distant relation for Tortoise (see 2006 for earlier photos) - square transom with hull tumblehome etc... 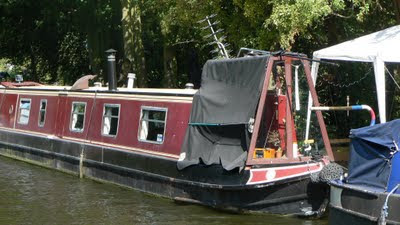 Possibly the tallest cratch I've seen around, but I don't see why not, no taller than a pram hood on the stern... 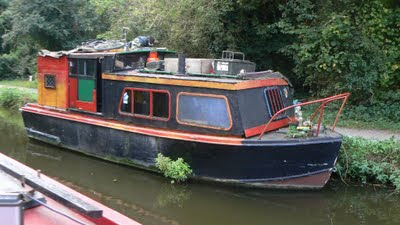 I love the various colours on this boat, and also that it dares to be just a little bit different. So many boats - GRP or not - all look the same. It also occurs to me that a little plastic cruiser could well be fun to see how well it would run on electricity, assuming it could carry the weight of batteries required. Assuming enough charging opportunites could be found/created (friendly pubs and a long extension lead?), could well be a pretty green - and beautifully quiet - cruising option.

We crossed locks with Chiswick on the Leafcutter John/Lisa Knapp tour. Didn't manage to see any of the gigs, but they sounded interesting - apparently LJ had been using underwater mics to record th sound of the boat to use in the performances. 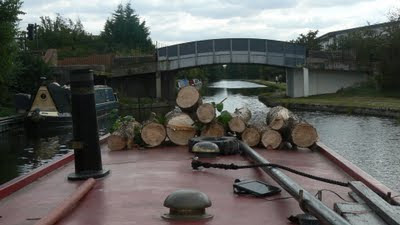 Logs, acquired in Uxbridge on the way home. They look great (don't they?) but being freshly cut were merrily leaking sap all over the roof, so are now languishing just off the towpath until next winter...
1 comment:

low voltage links for me

just wanted to stash these away where even I won't lose them...

discussion about running a 12v house - boats already do, of course... (cwf people may recognise the intolerance people who know a very little have for each other in the comments)

USB phone charging (and other thoughts) and USB gadget roundup (have been looking into a standard 5v charging/connection system for phones, mp3 players etc, especially if based around solar/wind up sources)
No comments:

A work meeting on Friday introduced me to the idea of 'Project Rainbow', which seems dedicated to pointing out the bleedin' obvious which had gone un-pointed. In front of three senior managers, it took a lot of sitting on hands for me to avoid asking which of them were Bungle, Zippy and Geoffrey.

In other news, far less connected to gainful employment, I get to do sound for Jeremy Hardy, singing on Thursday. Regular Radio 4 listeners will understand what a personal best, if not career peak, this is for me. ;-)
1 comment:

Well, not quite, although I was a couple of weeks ago when I wrote, and then spared any poor passing readers, a largely pointless rant about a cyclist - in London, this is - who told me that traffic lights didn't apply to cyclists, they're for cars. Suffice to say i still haven't entirely calmed down from this comment, speaking as possibly the last cyclist in London who does pay some heed to the highway code. Not only does this behaviour lose us respect (and therefore rights) from other road users, but it completely ignores the safety of pedestrians, who's right to cross a road without being run down is pretty fundamental in my book.

Perhaps you got the rant after all.

Anyway, work progresses on the boatman's stove; Jon at Windy Smithy (.co.uk) has made me a nice adapter plate to bolt to the top plate of the stove, to fit a flue to. Meanwhile I've been working on the surround; according to the BSC inspector masterboard (as sold - and already bought from - by one local chandlers) isn't considered to be up to the job, or at least won't be in the future, and asbestolux - aka Supalux, it actually says on the board - is better. I remember trying to research this some time ago, and going round in circles a little, so for my own peace of mind rather than the regulations I've got some supalux and put that over the existing masterboard, whoich will then be tiled over that. I've a feeling anything bigger than 4" tiles will look daft i the space, so sill be doing some serious tile shopping soon.

All this is in the context of seeing a completely burnt out boat recently, and reading the safety report on Lindy Lou, who's well fed stove set the rest of the boat alight, casuing one death. I suspect most boat fires are down to 3rd party action when no-one's aboard, but even so, one to be careful of.
2 comments: