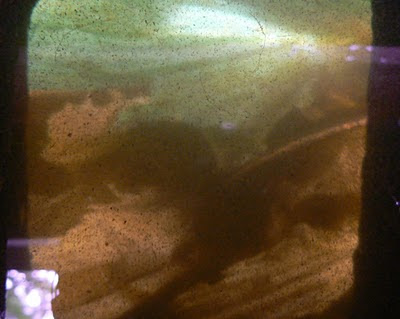 I only made it to Slough Canal Festival by bike this year, only having one day off that weekend. A few days later, however, I took Tortoise down to the road bridge to collect (a much delayed, but anyway) wood delivery. Having heard rumours of logs further down, I headed west. Access as far as the festival site a couple of bridges further down wasn't too bad, having had a few boats up and down (the trip boat did a sterling job of picking up rubbish on it's prop), but from there onwards, it was a nightmare. The rather unclear picture above is the view down the weedhatch; there's prop in there somewhere, but I'm not sure where. There's just so many platic bags, basically, and it's not going to get any better; more boats would at least pick them up out of the way for the rest of us, but there's nothing to go to on that stretch anyway, and the canal's full of plastic bags...

I gave up on finding any stashes of logs, but settled on a couple of flytipped pallets and the odd log or two which seems to have been fished out of the canal and dumped. It's a start.
4 comments:

A late start at work allowed me to wander down to the Thames to see David Walliams swim past on the ebbing tide:

To be honest there wasn't much to see - a dot surrounded by support boats; it's the human endeavour that is the spectacle rather than a momentary glimpse. A few people were following him down the Kew side towpath, and on the Brentford side a smattering of pot banging, whistle blowing and flag waving marked his passing.

As Mr Walliams moved on, though; the following boat, containing the gentlemen & ladies of the press, er, didn't, just sat there revving it's outboard. There's a bank of gravel where the Brent joins the Thames, and they found it. At first the fourth estate took the opportunity for a photocall: 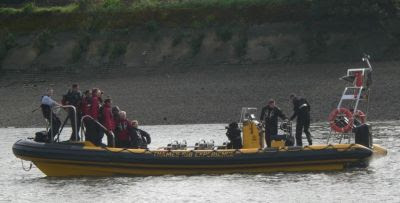 but, as the Walliams entourage disappeared around the corner to Kew Bridge, it was clear they weren't going anywhwere this side of the tide. Eventually the PLA launch 'Chelsea' came to the rescue and took off the journos: 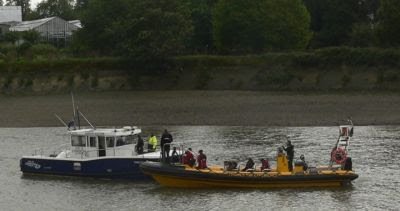 The launch & crew just had to sit there; they were still there at midday as I left for work, and had another few hours to wait for the water: 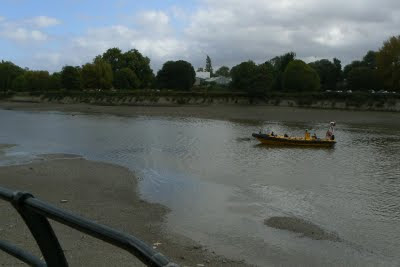 Meanwhile, the tiny dinghy originally following the whole lot, protesting the levels of human effluent put into the water (but alas only so there's more fish for them to torture, being an angling organisation): 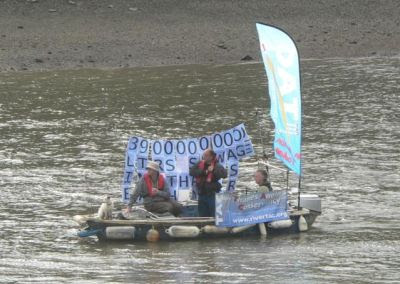 got into trouble itself, running down the outside of the press boat and beaching themselves on the island, before eventually heading off again: 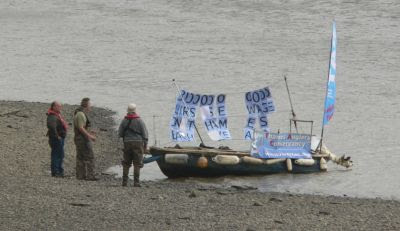 Many thanks, by the way, to Mike Mason of dutch barge 'Serendipity' moored at the mouth of the Brent, who emailed me the press boat photos, which all happened after my camera battery had died. I've published them small deliberately; if any press types want to use any of them, I'll happily put you in touch with Mike but you can't nick them from here...
No comments:

Nice to see some of your have been using the little tickboxes below the posts, and possibly not without irony, either.

The were originally added to gently satirise another blog's self-aggrandisement options; but, like Lehrer giving up satire when Kissinger got the Nobel Peace Prize, that very blog I realise has either finally tipped into insanity or must be satire itself, it's the only explanation. So, bye bye tickboxes. Few noticed or cared.
1 comment: