quick post to report BSC inspection today - largely fine but not a clear pass - a couple of niggly things on fuel & exhaust pipes, and a tiny gas leak somewhere near the Morco water heater I'm not looking forward to trying to find. Also the gas regulator cut out is out of of spec - that's something that really should have been checked when installed relatively recently, so something I may be able to follow up on. I have over a month to get things sorted and have my second (included in the price0 follow up inspection, but knowing me that will go past all too quickly...
No comments:

of festivals and domes (tangible ones, even)

I've been out and about with the PA again; a two and a half week road trip of an album launch and two festivals was thrown into the air by the short notice cancellation of the Big Green Gathering. I've heard as many reasons and analyses as people I've spoken to about it, but it's clear that the local authorities wanted to kill it, and kill it for good. For words more well informed than mine try these letters in the Guardian a few days ago and George Monbiot on the subject. Are people who are taking the future of the earth seriously really that much of a threat to the status quo? I can only conclude we are, which suggests to me that they know we're right, which isn't what they want to acknowledge,let alone do anything about other than suppress it.

My second festival went ahead, though - I'm still processing a great few days, but the interregnum beforehand gave me a few hours to build a 1v geodesic dome to sleep in at the event. A temporary structure made from plastic tarps (uncut, and therefore very much reuseable), the frame being plastic tubes joined by cable ties: 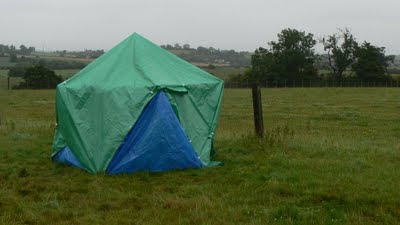 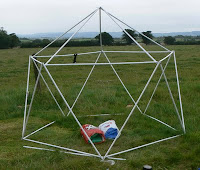 all sides are 1.5m, giving me a tent only slightly bigger than the minimum I'd need to lie in and yet I can stand up in it. A blue tarp forms the groundsheet and door, the green one (after a lot of faffing) more or less covered the dome bar the triangular doorway. A suitably successful indulgence - sorry, experiment, and well worth a mk2 with wooden frame and canvas cover. Not a tent to go backpacking with, but if I need transport for the PA anyway and I'm staying more than just a couple of days at an event, it'll be good to have the space - and a little bit of uniqueness. ;-)

The link hidden above to simplydifferently.org is well worth a peruse - lots of info about different semi-permanent structures - with lots of diagrams, and serious maths for those that find it useful (and scaleable diagrams with stick men in for the rest of us). My dome is essentially 2/3 of a regular icoshedron made purely out of equilateral triangles (hence being almost as tall as it is wide) - domes with higher (non-equilateral) triangle counts get closer to being half a sphere - prettier, perhaps, but a lot more poles to carry. The 'yome' uses this shape to full effect (clear distinction between sides and roof, so half yurt, half dome) as a commercial enterprise - but it's easy to see how I could easily modify the design above with more triangles around the side and longer roof supports for more floor area - in fact if I bear this in mind with the mk2 version, at least side struts & panels could be reuseable in a wider version...
1 comment: