A new Bridge for Brentford

Indeed, albeit one only partially across the Thames; from the north shore to Lots Ait; one of the islands just downstream of the Brent/canal outflow.

We spotted work starting on the old shed on the island a few weeks back - once a depot for the Thames Steam Tug & Lighterage Co (later less poetically Thames & General), whoi'd provide the motive power for trains of barges being towed from the Brentford Dock rail/river interchange into London's more central docks.

What's interesting is that while local word is that a 'leisure centre' is to be biult on the island, the internet tells me it's going to be developed as a boatyard and small business workshops, which is much more exciting; perhaps there's a bit of both.

I'm assuming the end of the footbridge is temporary; I can't imagine they wouldn't build a footbridge without ramp access these days. 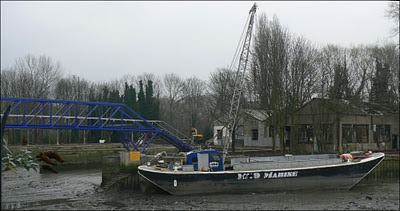 here's another view of the bridge, taken through the security fence/gate on to Brentford High Street: 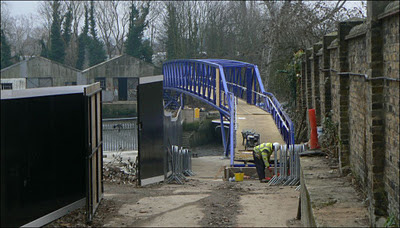 In a coincidence that could only be fairly called serendipitous, I spotted a previously unknown (to me) book about Brentford Dock, and the railway link to it, in the local library this morning: 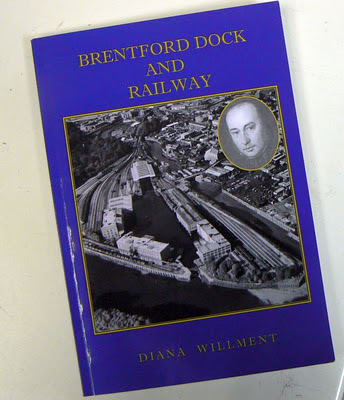 It's an interesting read, and filled in a lot of the background for me, with a fair amount of canal related stuff too. When the GWR was built from Bristol to London, it was actually easier to get goods to central London's docks via canal from Bulls Bridge (very close to the railway at Hayes) and down to Brentford and the Thames, rather than by road from Paddington. Even this proved to be slow and expensive, so pretty soon the branch was built down to Brentford to get traffic straight into lighters; in operation for a hundred years until the shipping container and Beeching killed it off. There's a nice bit of snarking about the already extant LSWR line through Brentford (the current Brentford line, the station still being called 'Brentford Central' when I first moved here), too, and speculation that the three bridges road/canal/railway conjunction could have easily been avoided, and was mainly done to show off by Brunel...

The book is published locally by Dandelion Publications based on Brentford Dock itself, available, at least, in Brentford Library.
2 comments: