Swan but not forgotten

Round the corner from me, there is - or rather there was - a pub that looked like this: 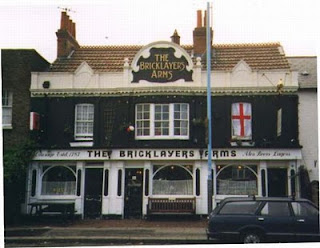 It only ever had a couple of people propping up the bar of an evening, so it was sad but inevitable that it closed and was up for sale, to be bought by developers and turned into this: 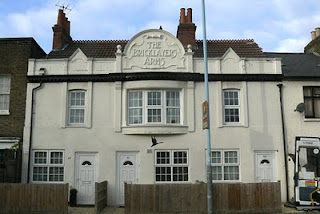 This was all a month or two ago; only a few weeks ago I looked up when passing and noted the silhouette on the front, and grinned broadly: 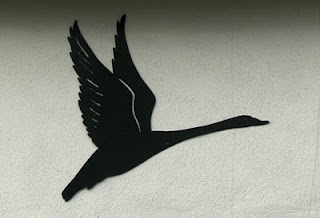 It's a local literary reference, and worth explaining.

Writer Robert Rankin, once of this parish (I have a picture of him somewhere playing my mandolin banjo at a gig, but that's another story) wrote a selection of books known as the Brentford Trilogy. In that great tradition of trilogies, there were nine at last count.

Inevitably (for Brentford), most of the action happens in the pub - the Flying Swan. The Bricklayers Arms is one of the pubs thought to be a model for the said hostelry, although the geography doesn't always work (why would anyone go down Mafeking Avenue to get anywhere), and other pubs are available...

So despite the demise of the building as a public house and now being three small houses (and hopefully much loved homes), someone - the owner of the middle house, or the developer, or whoever - has paid their own little tribute, in their own way. As I say, it made me smile.
4 comments:

It's been a while... there's a couple of blog posts, proper ones with one subject and a picture coming along, but who needs convention...

Well, we haven't quite finished the studio, but even so, find ourselves in the company of two cheery northern bearded types who like motorbikes & cooking, and working more days than anyone thought possible. There's still tickets if anyone wants to sit in a studio for four hours watching other people cook; it must appeal to somebody.

One thing about being stuck at work all day; we're stuck with handcuffed installations of windows xp & IE7 on the computer, and some blogs just crash that, some don't, depending on the template, I think. I'm generally inclined to blame Bill Gates, but it does mean I don't always get to see what people are up to, sadly.

A wee bit of boating to report; we had a lovely day last week bumbling along the Aylesbury arm on Blackbird, which is thankfully a lot nicer than the mere flight of locks I imagined it to be (although sixteen locks in six miles is at least noteworthy, Adam would love it). One pound was so low we were pushing through mud, another stretch was straight out of the African Queen (the bit going through reeds, not were they forge a new prop from a bit of ore over a wood fire). We also sussed out the inevitable biker pub with pool table & decent jukebox (although every possible variant of heavy metal did dominate somewhat).

Tortoise needs the odd job doing, as ever; on a quick visit to the moorings I did manage to solve the Mystery of the Missing Logs, albeit with an explanation rather than restoration. More usefully I should note that the 1 & 1/2 13w suitcase solar panels I have topping up the domestic electrics seem to be doing a fine job; the last 1/2 sits on the ageing starter battery, similarly. Don't know if Tortoise will manage any more excursions this year, but if anyone else is passing through West London, as ever do shout, and if I'm not at work marvelling about the geordie pronunciation of 'strudel', I might come & do a lock or two. Or just come to the pub afterwards, who knows.
4 comments: