I'm not sure if this post is about boats, or the internet 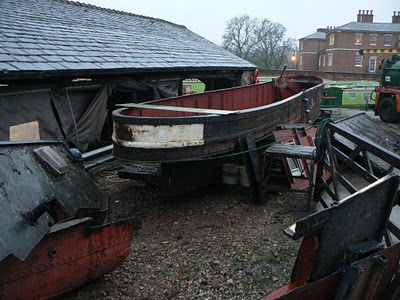 Whilst being slightly nosy in a Stone boatyard, we spotted a hull being heavily worked on; in fact it had a new bottom and lower sides, new swim, had been stretched by 10', and the previous cabin had been cut off. So mostly a new boat, really. ;-) The curved pieces in the picture below are actually the old chine sections with quite a curve, the friendly guy we talked to reckoned Spitfire must have been built as an icebreaker, I think. 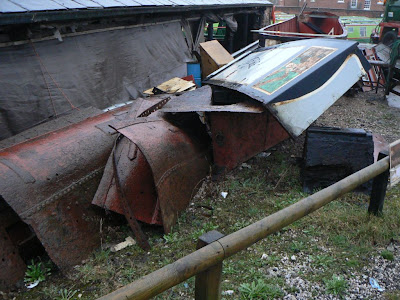 It proved to be Spitfire, a 'BCN Tug' from 1940. Jim Shead's site lists it as 46', so that would make sense from the stretched length we saw. This is where the internet bit comes in - there's loads of info out there about it, say here (ironically on Roger Fuller's site, Roger having the next boatyard along), here, and here, who ask for up to date information. I mention this as I'd love to have more history for Tortoise, although of course more modern leisure boats tend to be less well recorded. There's twenty years of history lost; 1980 is only a guess of manufacture; Jim & Mary found her for sale as 'Lyndon' (owned by Lyn, and Don) in around 2000 and renamed her Salad Days. In some ways it doesn't matter, but it would be nice...
4 comments: 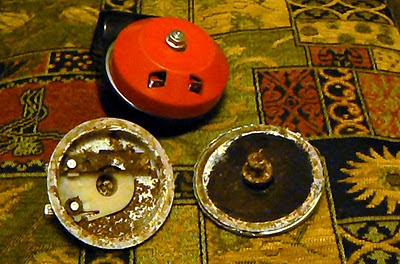 I think it was last time I rounded Cowley junction (still, incidentally, only signosted 'marina' - the Slough Arm may as well not exist) I spotted my horn wasn't working. I'd get nowhere on Indian roads, but fine on a winter's day in the Uk canal system. Anyway, I finally had a look, and the horn mechanism has well and truly had it. A while ago the spiral acoustic horn assembly had been knocked off the unit, so the subsequent ingress of damp had caused severe corrosion, not even I'm going to try to fix this one. Thankfully the horn was originally bought as half of a pair anyway, so I have a handy replacement.

I'm struggling to find this signifcantly exciting myself, but the horn mechanism proves to be a glorified buzzer, driving a metal diaphragm; 'klaxon' style horns actually used an electric motor to drive a ridged cam against the diapgragm. Yawn...

Anyway, while pottering about on the front bulkhead I'm also sorting out the headlight, which has remained the 'temporary' installation put together in Grove a couple of years ago. I'm mounting a rectangular headlight on the front bulkhead side, along with the horn (and for completion the telly ariel socket), allowing clearance for the front doors be be fully open. This also significantly tidies the wiring - previously the headlight was on the left side of the boat roof, now it's lower on the right. It's still adjustable to favour the tunnel roof and to avoid dazzling oncoming boats, naturally.
No comments: