Escape from the Slough Arm 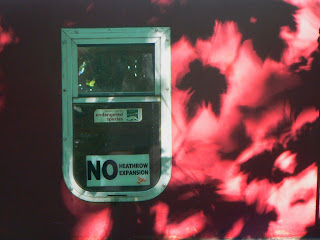 We've made it out, although it felt like a cross between a ditch and the Sargasso sea for much of the arm's length. Tortoise is now pestering Blackbird in Cassiobury Park, although we're not shiny enough to stay for next weekend and will be moving ourselves on shortly.

When I chose red for Tortoise, everyone said 'it'll fade badly' - and they weren't wrong. So I'm been adding to the blissful woodland piece with a bit of wire brushing and sanding, patching up a few bubbles & scratches in the paintwork (making it a lot less shiny all round in the process). If I've got any red paint left that hasn't set hard, I'll probably top it up for now. But sooner or later it'll be time for a new top coat, and I'm thinking a nice gentle dark green might be nice...