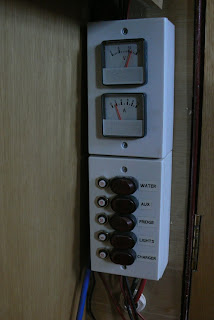 Finally added the voltmeter & ammeter to the DC distribution position. Ideally I'd prefer digital meters, but until I can find the right ones (at the right price), these cheap analogue ones do the job. The modular idea of using the pattress means that I can easily swap over in the future.

I've also put in 40m of 38x9mm oak strip as beading on to the boat, covering egdes of panels and going around the windows, above the gunwhales, anyway. There's still a few sections needing doing, around the front door and the front bulkhead shelves, but it has changed the look of the interior, making it all a little more tasteful, along with some curtains made from a charity shop duvet cover. ;-) This also meant that I finally tidied up the lighting wiring, too - I'm still looking for a nice low-energy light - presumably LED - for over the dining table, the rest are small strip flourescents - hardly elegant, but they do the job.

I also have running water again, thanks to the new pump bought from ASAP - the supplied water filter had ghot damaged in transit, an email asking for an RMA number produced a replacement in the post the following day. Good service, there.

In more random news, a short notice call into work to cover some shooting in an area I look after reminded me how easy it was to go into work from the moorings. Hmmm - anyway, once at work it turned out part of the film crew was another Iver resident - who's boat looks exactly as if a tv designer lives on it. ;-)

As mentioned, I'll be around & about at Little Venice next weekend. One boater said to me he wasn't going this year as 'it's the same every year'. Isn't that exactly why everyone else goes? ;-)
1 comment: