A quick PSA... I'm guessing anyone reading this will also know Richard & Sue on Indigo Dream. I note they haven't blogged in a bit, but just wanted to flag that ID, Richard & Archie were heavily featured on telly on Monday - James Martin cooked a couple of dishes on ID's prow as they bumbled around Birmingham's canals.

You can watch it through the link below, or on telly with one of the new-fangled smart tvs, youview box or whatever gadget you choose to attached to your idiot box... 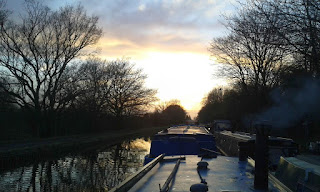 No surprise to one or two of you, but Tortoise is for sale; it's been twelve lovely years, but new adventures beckon, also involving woods & water, but a little more stonework ;-)

ad for Tortoise on VC Marine

Anyone who's followed this blog for a few years will know what a great little boat it is & the adventures I've had, very easy to single-hand and would be lovely for a couple, too.  Fine on all but virtually waterless canals, goes like a dream on the Thames - and very cosy when the stove is going.

I've no idea if anyone bookmarked the fancy web address of NbTortoise.org.uk, but that will disappear in a few weeks, but the 'proper' address of nbtortoise.blogspot.com will remain, and may even include news of other adventures in the future. I also note I have an unfnished draft of a guide to single-handing in Thames Locks, which I may finish - one day. ;-)

Meanwhile thanks to all I've met on the canals and through the internet bit thereof; still not averse to a bit of drinking (or lockwheeling, or even both), so shout if you're passing ;-) 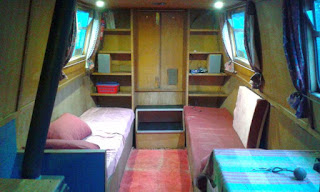 Putting posts together takes ages - I'd forgotten. I think Sarah on Chertsey has the right idea - the briefest of notes, daily, to be fleshed out later, Perhaps next time. As it is I expect these witterings to be fleshed out too. There are, after all, a record for me, really. 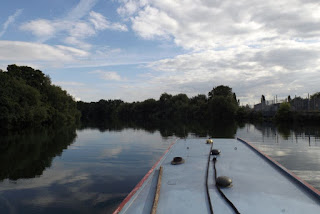 A gentle amble into town, the pretty way - the canal tries both sides of the Avon, so valley one side and hill the other. My favourite official long term mooring was at Murhill, on the offside - tucked into the bank, bit of grass, mostly tress. Perfect.

I'd already decided to stop at Bath, so not point locking down on to the Avon, but I found a nice mooring not far from the Top Lock. 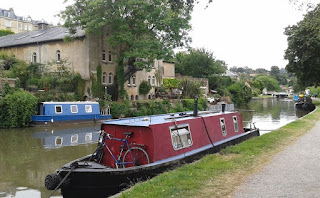 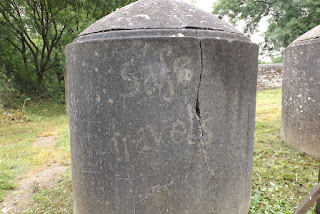 (these concrete things are on quite a few accommodation bridges, presumably part of WWII invasion preparations, along wth the pill boxes along the route. I like the message on this one... 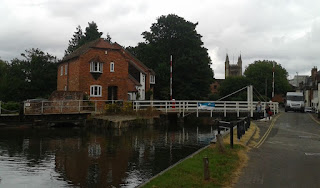 Newbury is a nice enough little place, even if they do hide the boring but useful shops on the edge of town up a scary dual carriageway. The RSPCA shop looked packed with fun stuff, but failed to be open either of the (perfectly reasonable) times I was passing...

Kennet & Avon - I (Brentford to Newbury)

Well, I did mean to be a little more organised on this trip, but I'm at Newbury already... ;-) 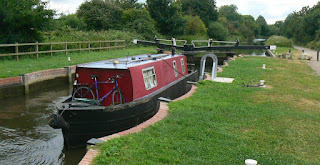 The K&A is one the of canals I cycled, years ago, and the opportunity came up to take some time off and get over here, so I did...

The strat was a little delayed due to a collapsed water pump on the way down to Brentford; a replacement was ordered from Calcutt, naturally I have a non-standard pulley size, but after bending two gear pullers from Toolstation I took myself down to the huge MSO boatyard in Brentford, who sorted it for me with a certain amount of amusement - and that's without seeing the size of the boat.

Most pictures are on my phone - so may be added later, or maybe not - who knows...

Odyssey on the Troy Cut* 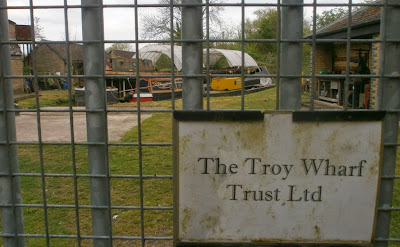 It is an easy gentle walk up the south side of the Troy Cut, from above Black Jack's lock, only being forced away from the water just before the basin. Opposite is mainly fishing lakes, we spotted rabbits bumbling around, largely unworried by the 21st century.

I had no idea what was at the end - the basin & boats were a nice surprise. The Troy Wharf Trust Ltd don't really seem to exist on the internet, which is of course fine, the have a nascent website with nowt on it... they do have boats, though, floating... 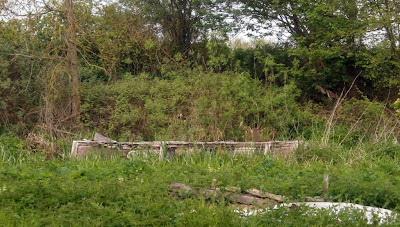 Acess seems to be through a gate (locked both times we visited) or through the back of a working granite/marble yard, who we decided not to upset. ;-). Photos are therefore taken through various wire fences, although we did have a good view of a very nice looking outdoor workshop setup: 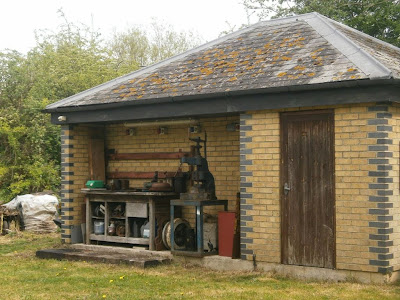 . The cut itself is listed in Nicholson's as 'unnavigable'. It is certainly narrow and possibly shallow in places, but Mimas - visible in my photo a few weeks ago was spotted at Rickmansworth Festival last weekend, so I reckon it can't be that bad. I'm not convinced, however, there's space for a full length boat to turn, difficult to see on the ground, or indeed on google maps. Also visible is an ex(?)-CRT workboat and a bantam tug - can't imagine they're stranded, either. Couldn't see a name for the wooden boat being worked on, though.

I like that this exists, quietly, away from general radar. Who wouldn't want a quiet little wharf to play with old boats?

* - well, what did you expect? Would also like the offences of being disappointed that no boats are called 'Wooden Horse' (couldn't be more appropriate, bearing in mind their charity objectives, or lack of references to MilliHelens (the SI unit of beauty required to launch one ship to be taken into consideration, m'lud. 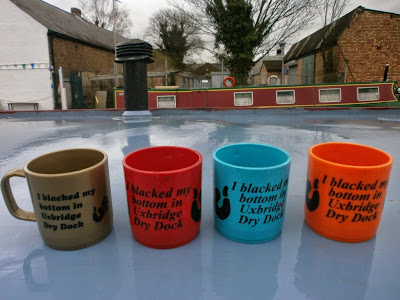 I kind of hoped I'd get a matching teapot or something with the forth, but alas...
3 comments: 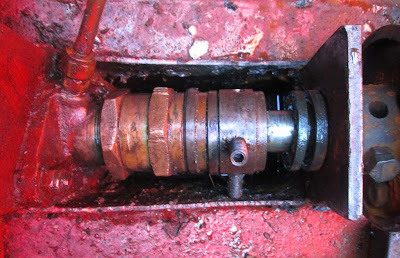 It goes without saying that Tortoise is a strange boat, and not least in the nether regions. The prop shafts slopes downwards, river-style (there's a bloody great universal joint just to the right of the picture). To the near right there's a plate that the shaft passes through, but serves no useful purpose, as far as I can see, but...

On the left, stuffing box & lock nut. That I understand.

Then - though, the collar with the overlong grub screws (must find some shorter ones), clamps on the shaft. Either side of that, there's a pair of big washers with a ball race in between. I can clamp the collar towards the stuffing box so that the left hand trio have some function, or towards the fixed plate so the other set does - but can;t see a way that both have use. It is possible that the fixed plate it supposed to interact as a sort of bearing, but it can't necessarily support the shaft.

So I'm guessing in the past it has been assembled wrongly, or possibly has bits missing (or even extra, or at least unrequired bits). I'll leave it for now toward the stuffing box as a kind of extra grease water barrier, but all a bit of a mystery.

Blacking soon, so I've the opportunity to at least attempt to replace the stuffing, and try to make sense of the rest of it...

* well, there was no call for a gland pun, was there?