Those who know me, even a little would probably put 'pedant' as one of my attributes if asked. Hence I remember all the fuss ten years ago from a certain quarter of society who insisted that the end of 1999 was not the end of the millenium, century, or indeed decade, due to something about counting from one or zero, and all that. They were largely ignored, and obviously their parties at the end of 2000 were less than notable.

I like things to be correct & clear - good communication is essential, and being precise within a complex if poetic language is worth the effort, in my opinion - even if I get things wrong as much as most (so no marking out of ten at the bottom, please). This was something heartily discussed by myself (engineer, of sorts) and father (metallurgist) with my stepmother who, despite being an ex teacher, was vehement that the details don't matter any more - computers will sort it all out for us. Ouch.

Anwyway, yes. Decades. If we want the decade to end in 2009, it will, and no number of awkward sods will change that. I do worry about apostrophes more than I should (but they're useful, they convey added meaning, sometimes critically so), and as someone pointed out recently, people use quotation (not quote, I like to think, although again now used interchangeably) marks for emphasis rather than their correct use. I find myself being annoyed, when such emotions are largely futile. Anyway, a decade is just ten years, it can start and finish whenever we bloody well want it too, for our own purposes. A certain war criminal turned 'peace envoy' insisted on a decade of premiership, without it fitting neatly into the right dates.

The last ten years have been eventful, but I probably know myself a little better at the end than at the start though. Getting Tortoise has been a major step, and yes, suits me well. John o'Farrell was on Woman's Hour this morning, and described that as his own reaction to a mid-life crisis he was going the wrong way and thinking about getting a canal boat and growing the appropriate facial hair (as opposed to getting a sports car and a partner half his age, being the context). It wasn't the put down it may have sounded like (since I'm digressing today, John Humphrys was decidedly snooty to comedian Dave Spikey when he took as his Mastermind specialist subject the Leeds & Liverpool Canal), as he was very positive about the life and the community. I'm a bit like that; I bought a boat in my thirties, after all, and it's been great.

I look forward to spending new year's eve in the best possible company, looking to the sky (let's hope it's not cloudy) and forward to new adventures.

Thanks to everyone who's been part of Tortoise's progress, in all ways.

this posted edited after belated proofreading. We're all human. ;-)
1 comment: 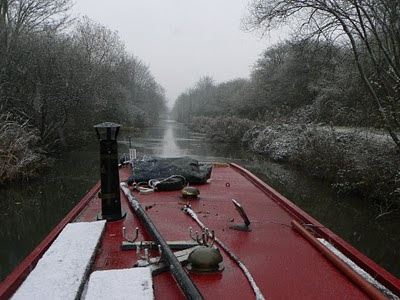 Last Wednesday, just before the snow really kicked in we took the opportunity for a moderately eventful (I really must fix my fuel gauge - again) trip up to Uxbridge, to collect the new flue I'd ordered, and that playing trumpets on boats could be considered to be unlucky). The Slogh Arm had a thin coat of ice, although a channel had already been neatly cut that morning, presumably by a boat coming in for craning out. Pushing the speed an little made the wash crack the ice at the sides of us in a neatly artistic pattern - fun, admittedly. We made it back before dark, and couldn't resist firing up the stove - it's only been about a year since it first came into my possession.

Since then it's been fixed & cemented in to the adapter collar made specially for me by Jon of Windy Smithy (bolted to the top with ten M6 bolts - it's not going anywhere, and there's a tub's worth of fire cement under the top around the flue passages, sealing it in nicely)), and I'm having great fun getting to know it. 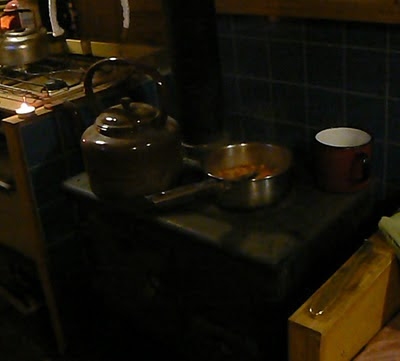 World's worst photo, but here's it in action this afternoon - there's potatoes (and an onion - I'm strange like that) baking in the oven, beans simmering on top, and the red cup contains apple juice, very nice hot with Zubrowka vodka. ;-) The big brown kettle is has hot water - it's not great for condensation to keep it simmering away, but comforting, I must admit.

Thoughts so far; it's a lovely little stove. Lighting takes a bit of practice; best done from below (via the grate hatch) with the top plate closed, to avoid filling the cabin with smoke. ;-) Once it's burning well the draw up the flue makes it OK to open the top, and since there's no window and I do like to watch a fire, that's a blessing. So far I've only been burning scrap wood, which of course needs regular attention, I have some coal on board but am yet to try it.

One interesting (bearing in mind online suggestions that new BSC requirements would make a traditional boatman's stove illegal) point is that after hours of use, the tile surround (4" away from the stove) is barely above room temperature. Unsurprising as the sides seem to be lined with rockwool, the heat mainly radiates from the stove top itself, ideal for cooking, of course. Tortoise heats up nicely, albeit slowly (no immediate radiant heat from the fire, it only really starts heating the boat once the stove itself is hot) - being slightly bigger than a trad back cabin, but I'm not sure how well it could heat a bigger space.

I'm looking forward to doing as much cooking on the stove as possible - more sensible in winter than summer, but I don't see myself limited to stews and the like - if it's hot enough for frying, most things I make at home should be acheivable, including bread & cakes. I've never really lusted after the massive edifice of an aga or similar, but this is just right. Thanks again to Geoff & Laura, without whom... - well, without whom I'd still be idly wondering what boatman's stoves are like. ;-)
6 comments:

There's only a couple of days to go before it disappears off the iPlayer (here), but last Thurs the current BBC 'popular science' strand did a whole show on a day's 'experiment' to power a house from a bank of 100 cyclists. Well worth a watch if you can - it may well be preaching to the converted to those reading this, but amusing nevertheless. If you thought pedalling for a band was bad enough, try coping with an electric oven...

It may be an exaggeration to say I consulted on the show, but I certainly helped with ideas with the guys who did it when they were planning it a few months ago. If you don't actually get to see the show, there's a few pictures of the event here

You can even buy one of the generators from the show, or of course build one from the info on my site instead...
1 comment:

a stroll to the river

I've just had the week at a training centre, where a tutor just about managed to make a boring subject nearly interesting. The site has had a few ownership changes over the years, and it's difficult to know who owns what now - especially the hundreds of empty, abandoned dorm rooms (the buildings unlocked, making for a spooky walk through) and the rather cute lodge cottage on the way in.

They also - or at least used to - own the land on the other side of the road, down to the river (Avon). Lunchtime walks were pretty essential for sanity, so to get to the river, I had to climb over this gate...

...then around the overgrown tennis courts, where I found this sign...

...and then down to the riverbank, where there's a nice bench and a couple of chairs, and this view: 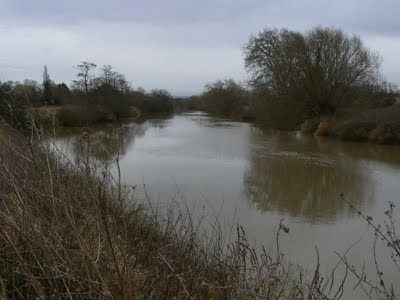 Worth the effort, I thought. There was a lock a little further up the river, but I didn't have the time to get there. Fairly fast flowing at the moment, but certainly navigable. I was intending to come down here by boat for the course in autumn 2008, postponed to now. One day...
3 comments: