I tend to get quite a few emails about my bike powered sound system, normally asking how to build one, despite me putting a fair amount of information on the web already. I generally reply as comprehensively as I can, often having to explain the laws of physics to them about why they can't run a projector/kettle/microwave from one bike. I try to be as polite and enthusiastic as I can, but often I don't get as much as a 'thanks for your time' in reply.

Two emails yesterday were quite noteworthy. The first was from some kind of PR/events company, who 'needed' me to build them two bike-based sound systems that generated the power for the music as they cycled, at the head of some kind of parade for a tv show on Sky, and can I have them ready by the 24th July please? I tried to call them but 'weren't in the office', so replied as clearly as I can - that

I must admit I'm not expecting a reply to that one. ;-)

The second one was from Will Golding who is part of the Treehouse gallery, an arts/spoken word project based in Regent's Park over the summer, launching July 20th, would I liek to take part? There's not much on the website yet but the provisional schedule I've been sent as a prospective contributor is pretty impressive - Jay Griffiths, George Monbiot, Benjamin Zephaniah and many, many more, with lots of creative sessions for adults & children too. I'm not quite sure how I will be involved, but it looks like an amazing project. There's some constructional photos here, I doubt I'll get a chance to look myself before mid August at the earliest, but do so if you're passing...
No comments:

I may well end up spending more time traveling on other people's boats than my own this year, but I have no complaints about that. Iver moorers Kingfisher had been away on a ten week adventure (including meeting Richard busy painting Happyhome) and came through the final stretch of the Thames this morning into Brentford, so Tortoise Lockingwheeling Limited sprang into action (and the photographic division had a good workout too). Here's Kingfisher turning into the Grand Union/Brent: 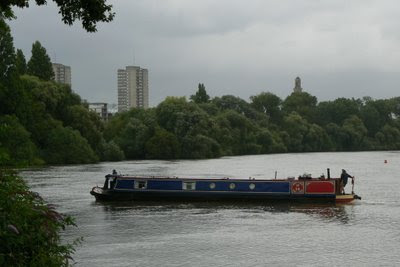 the previous pair of boats out of Teddington didn't have enough collective braincells to work the automated Brentford Gauging Lock (despite arriving about half an hour earlier), so I ended up working their lock too, whilst getting Kingfisher & companions Dream Two through the second chamber. Then onwards up through the Hanwell locks; just before the flight itself, I got slightly over excited about spotting Leviathan and her new owner Steve, and getting to see that amazing interior for myself as blogged about previously. I took a couple of photos inside too, but failed to ask if it was OK to post them, but the outside is public enough: 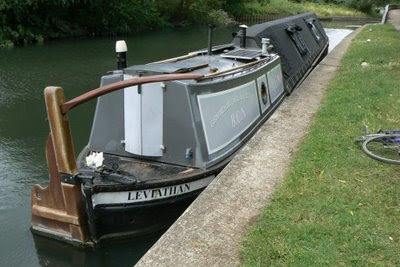 You see, sadly enough, lost animal signs, but rarely are they followed up: 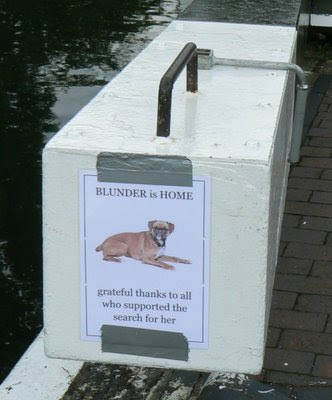 An excellent day out, despite a a general failure to find anywhere alongside the canal for lunch, as the Fox was passed far too early. Cycling hoe I stopped to chat to a woman in a green polo shirt and wellies, with ruibbish bag & rubbish picker thing - no, she wasn't from Thames 21, she just did it because it needed to be done. Yes, I'd picked up a bit of rubbish near (and in) locks while waiting, but I certainly wasn't going equipped. Such people's existance more than makes up for the louts who leave the mess in the first place.
2 comments:

I'm a day behind, but a new resident at the Iver moorings is Lilian Rose, a new daughter for Geoff & Laura on Lady Elgar - and the reason Lady Elgar gained an extra bedroom, and I gained their old stove... ;-)
No comments:

In 1990, I had three months with nowhere to live (or at least anywhere I wanted to live, to be fair), no income and no inclination to get a job (as I was due to start the job I am indeed still in). So I spent two week volunteering at the Centre for Altrnative Technology in Machynlleth, then cycled through Wales & southern england, visiting people I knew, and when I failed to find a floor for the night, camping. Income came from lunchtime busking on a mandolin, which otherwise shared the rear pannier with a tent, sleeping bag and a change of clothes. When I found myself at Ramsgate I got a ferry and crossed Belgium, Holland and Germany (largely along the Rhine & Neckar rivers), reaching Tübingen, south of Stuttgart to visit a travelling acquaintance, before getting the train home in about 18 hours (reading Jilly Cooper's 'Polo' I recall, being the thickest of the books in english I could find in a fleamarket. 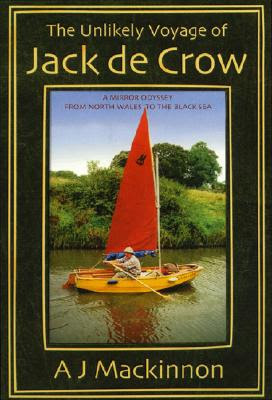 A very kind recent loan of a book written by Sandy Mackinnon brought that all back (and made it seem all very pedestrian). Transport for him was a mirror dinghy, the instrument was the penny whistle, and he did Ellesmere to the black sea (without the aid of a cross chanel ferry, too). I do hope some of the situations are exaggerated, as he seemed to risk his life about twice a week - but a lovely human adventure, and make me glad I've had my own experiences, too. I was going to say 'current reading', but I finished it at about 1.30am last night. ;-(

There's a nice article about the trip here, which also includes a couple of photos - the book itself is lovingly illustrated by the author's own line drawings, making it even more like a Swallows & Amazons adventure. Recommended.
No comments:

It did feel a bit like that; getting past the weed on the mooring stretch of the Slough arm is a bit like reaching escape velocity, only you have to stop and clear the weed hatch every so often. Once I'd got passed Mansion Lane Bridge, of course, a boat in the distance seemed to be taking a very long time reaching the next, archless, bridge. It turned out to be Minerva of this parish, with a failed engine - so I turned around (because I can) and towed them back to the boatyard, and started again. I also discovered the weed had got into my blessed seacock cooling water inlets, so the engine would have overheated even if I hadn't been towing a 50' boat... ;-) 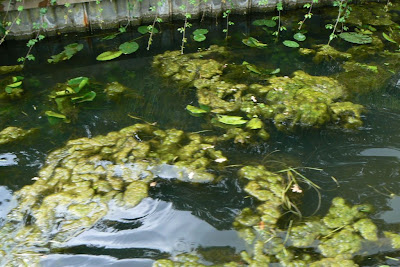 Anyway, the idea was to have a night away from the moorings, with the excuse of discussing stove work with boatyards as I passed. It's funny, Neil on Herbie has just blogged a very similar thought I was having - that some people with boats will just pop out for a couple of hours, to enjoy being out there, whereas others it's a three month cruise or nothing. I have a small boat I can turn almost anywhere, and may not manage a long trip this year - so yes, small wanders are the way forward, with possibly a quiet night on the water with a book for company. Of course the quiet night thing went straight out of the window when I passed NB Cossette and spotted Helen, so we arranged to meet in the General Elliot later. I've mentioned her before as a signwriter - she now has a website - http://www.handwrittensigns.com. Get in touch while she's still starting up and you'll get a great job at a bargain price. ;-)

Despite the pub, I made a relatively early start home in the showers of Tuesday morning, and was back at my home moorings by eleven. It was good to get away, and good to use the boat for what it is - access to green space and a little bit of peace & quiet. I may well have sussed out a quiet little spot on the arm itself for overnight escapes, I'll just have to see how shallow it is there... ;-) 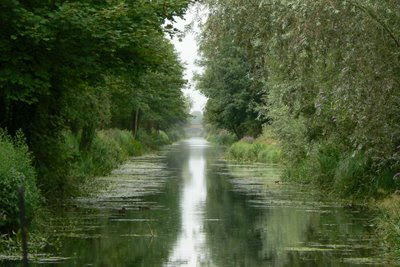