>More locks this morning, but not quite as relentless as yesterday's session. Shared some with 'Bliss', who were one lock behind me, and managed to ask the length question - they were 40, so we both fitted through several; I stopped at Wheelock, they carried on (and coincidentally I'm now moored behind them at Middlewich).

I went into Sandbach (not the services)- quite a sweet small town with two saxon crosses (surrounded by pubs, the saxons had their priorities right) and a quite hideous brick 'precinct' that seems to have no formal entrance or exit. On the plus side they have produced town maps with all the shops on, sorted by type, so I could find all the charity shops they had. ;-) A few more books (including two Robertson Davies ones I don't think I already have), and in one marvellously random hospice shop, a box of magnetic poetry words for a pound, which are ideal for back bulkheads: 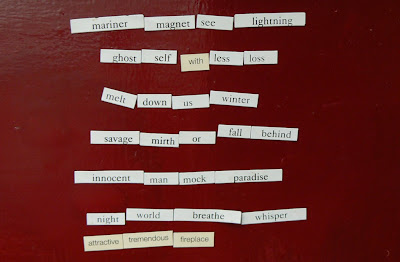 Oh - favourite interchange of the day was with a bunch of [older] cyclists at a bridge watching me work through a lock, while a couple worked their boat through the parallel onem the man on the boat, the woman up top. A bearded guy in his fifties says 'you need a woman with you to do all the work, like they do'. I looked at him - not actually over my glasses, but I should have done - and said 'my boyfriend couldn't make this trip'. They scuttled away as quickly as they could, leaving me with a big grin on my face...

ALl I knew about Middlewich, bar it being a junction, was that the boat hire place had a boat stolen - 'Holly' last year - the thief (who ended up with a suspended sentence) disguised it with a paint job and changed the interior, but it was nice to spot it on the canal: 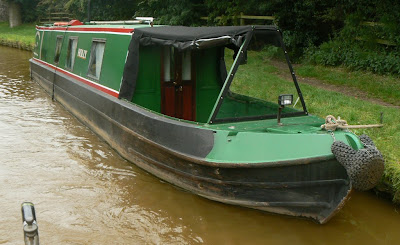 I got into Middlewich latish again after a fairly dull run alongside a main road, then down a lock into the junction and straight back up one again, and moored up for the night. Gardens come down to the canal on the other side, and chatted to Nick & Sue across the canal, who have a 32' wide garden and are looking for a 30' steel boat to buy... not selling yet. Not for a while yet. ;-)

Phil tells me the IWA festival is at Autherley junction in Wolverhampton at the end of the month... I'll be passing through, and could be pretty close in timing, too, but like a lot of things this summer, time & place often don't line up. Partially depends on when they want me back at work...

'my boyfriend couldn't make this trip'
*adores you*