An early start - the boat in moored in front of me had been running engine quite late, which I'd ignored and assumed was a necessary evil - but started up again at 7.30 and woke me up. I was amazed to see it was a hire boat from the Alveschurch branch in Wrensbury. When someone put their head out I asked them if they were having problems, and they told me they had to run the engine to get electricity - and told,me as if I was stupid for not knowing that. Apparently it was essential to run 'the toaster and the children's games'. I muttered something grumpily, made myself a cup fo tea and then headed off as soon as I could - if I'm going to listen to an engine first thing in the morning, it may as well be mine.

Stopped off at Maybury to look around the village (proud of lots of best kept village placques - all very pretty but deadly boring, and the pub was closed all weekend for a wedding). The church was similarly immaculate but at least had comedy gargoyles, again photographed in un-blog-friendly Ilford film, and a wonky tower.

Getting back to above Maybury lock bumped into Andante again, so we (or they, I realised there wasn't much I could do other than stay on the boat that wouldn't slow them down) did the rest of the locks into Grindly Brook, including the staircase, where tortoise was unceremoniously towed up, which at least meant I got to do something useful with a windlass at long last.

I stopped to wander into Whitchurch, the short restored arm stopping long before the town. Of course they have great plans to restore access to the centre of town, and inevitably want a landmark set piece like an inclined plane... strikes me that since the Falkirk Wheel opened everyone wants one - what's wrong with a couple of locks? Nice basic technology, that will work as long as there's water. Whitchurch does indeed have a noteworthy church - the huge great windows make it look more like some kind of railway building from the outside. 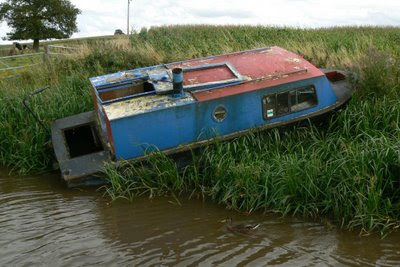 Then just on, and on, got into Ellesmere around nine. It's wierd - I cycled Wolverhampton-Llangollen by canal a good few years ago - must have been ten or twelve - and unlike some sections of other canals I've cycled, I don't remember much about it - although seeing a family bump their bikes along the towpath did yield similar memories. I do remember Ellesmere, though,mainly as someone nicked my big hat off the back of my bike, and I was so grumpy about it I failed to investigate the rest of the town... ;-) I do remember the wharf being a bit of an forgotten bit of empty industrial ground, but of course now it's a building site, to be filled with flats and 'boutiques' - which in my experience of Brentford means a branch of Costcutter at the base of every building.