On Sunday morning I was back at the boat, and chatted to new arrivals Nick and Jackie on Gloriana - Jacquie wanted to go straight into town to find a Quaker meeting, I was on my way back in anyway so we walked in until we found a local to give directions. Interesting conversation, about religion, how we come together to celebrate religion, also gender balances. This I thought about for a while - my acquaintance with druidry (a very ethical, moral approach to life, no prescribed deities or dogma) has been leading me to think about spirituality/community within in, what for me is an atheist basis - and it works, it does. I've long thought that religious teachings can be taken as models, analysises and metaphors for a way to behave, which mainly all come down to 'let's be nice to each other, guys' - which I think is actually a Douglas Adams quotation. I've also been thinking about how religions treat gender - mainly preferentially to the male - after a discussion at Climate Camp, too - that tends to be tied up in history & dogma, though - thankfully druidry, and as it turns out Quakerism, is a very equal thing, working with the individual rather than the label. It is 2008, after all. 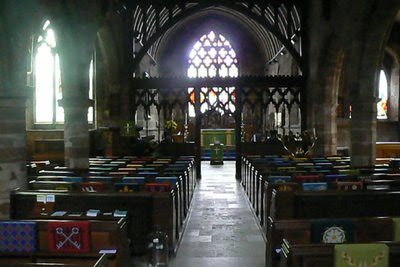 With all this in mind I walked into Cheddleton Church - I'm always fascinated by how much churches make me feel - and it's generally very little. Moved by the passion to build in the first place, moved in this case by all the colourful individual kneeler cushions (they really gave a warmth, a welcome to the place), but moved by the presence of people, not the holy spirit. As I experienced in a church in Kerala some years ago, I'm often jealous of those who have a strong, all-encompassing faith in something other - I'm left with a faith in my fellow humans, and to be honest I struggle with that, even on the canals. As I said in a conversation at a lock recently - 'it's a pretty much white middle class hobby (sad but true), but some of us read the Guardian and some of us read the Daily Mail'. ;-)

So yes, anyway, internal travelling as well as physical. A good time to mention friend (and artist, writer, teacher) Dierdre who is travelling in south America at the moment (without baggage, in various ways), and blogging it too. My trip is different, but in no way lesser or greater - just different. Each to ability & need. It's not a bad way to see life.