2nd Sept - Somerton to Oxford, and home (for me)

Last night was a lovely social gathering at an organic farm - Miche & Jeremy, who I'd met whilst staying with a friend of theirs on his boat on the Llangollen, and their other guests Jo Jo (who seems to own half of Peru) and Simon & Susanna, who have decided to move into bricks & mortar in Bristol rather than give life to their second child in a yurt this winter - also Simon has found a useful workshop space for his cabinet making. Not nearly nearly enough conversation with any of them, but lovely company all. We've verbally invented a green electric fence for farms, but the energy calculations are yet to be done... On the way home my big torch proved to have far too short a battery charge, and I walked the bike home - in the drizzle I'm becoming accustomed to, visibility was a foot or so in the dark, so hardly ideal cycling.

I was still dithering in the morning whether to leve Tortoise at Heyford, or do the trip down to Oxford. In the circumstances of reduced free time in the autumn (i.e. back at the beck and call of my employers) I decided to use the time while I had it, and squeezed into the end of the meagre 14 day moorings at the top of the Duke's lock moorings.There she'll stay until Thames exploration; I'm still hoping to make it up to Lechlade first, but may have to do a day at work in the middle of that week; I'll work something out.

On the way down I was able to make use of the 9' pole bought in Stone, and held up a few lift bridges with it: 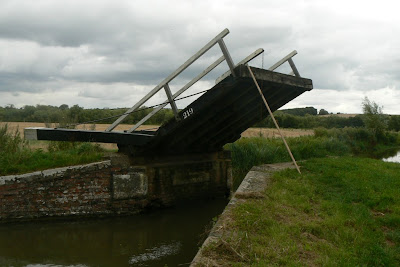 The ones at Shipton & Thrupp worked like a dream; others weren't quite so well balanced, and I wasn't happy about lifting up the bridge with one hand and getting the pole in with the other, so I did my more usual method of climbing out the wrong side and pulling the bought through in those. It's all doable though - I noted that in the BW pdf guides Phil reminded me about it says 'Oxford Canal is not recommdened for single handed boaters'. It's not a breeze, sure, but it's fine, really.

Cycling down to the station, just past Duke's lock, a new bridge was being installed - I never quite worked out what had happened, but apparently it's supposed to raise & lower hydraulically, and doesn't, so effectively blocking the canal. No idea how things ended up, but I'm sure we'll find out one way or another (especially if the canal route into Oxford remains blocked).

I've brought the errant water pump home (the pressure switch seems to be jammed on, causing the pump to leak, I think), and also need to think asbout the gangplank, which neatly broke towards one end the other morning, after the rather perfunctory mooring in the dark - I'm just glad it didn't go that night. I'm tempted to use the trick of a short length of ladder with board on on one side, but like the long pole, it;s so so little use is it really worth bothering with. I suspect the gangplank thing will be more useful on the Thames (although I don't recall needing it two years ago), but I've yet to make unique use pf a long boathook - I suspect that's a good thing, but can also see I might need it one day, and little else would do. It would still be neater though to just carry a the short pole (especially if the hook is attached), and a gangplank on the roof - that long pole is most of the length of the roof. ;-)

So I'm back at home in Brentford, having got back in time for the local Green Drinks night, fun as ever. It's strange to be back in London, though, albeit a vaguely canal related bit of it. I have realised, though, being part of a local recycling group, we might be able to do something to get recycling facilites with the newish facilities at Brentford, or at least raise the issue with them. A start would be a notice at each facilities point with a map to the nearest bins - supermarket or whatever - but bins themselvs with the rubbish would get a greater use, I'm sure.

Hey Simon - good to catch up on your marathon, busy journey south. Sounds fun-filled and lively!
Regarding the lift bridges, I found I could do them ok on me tod, apart from the heavy one down by the agenda 21 moorings which kept sliding back down my front, leaving an attractive green slime trail. Eventually someone came by on a bike and I grabbed him to help ;-).
Happy return to London x