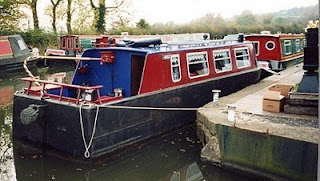 Whilst I was bring Tortoise back down the GU, a man delivering a boat for ABNB took a good hard look at Tortoise and asked me if I knew who built my boat - I didn't but he did. He'd recognised the boat as being built by his friend John Else, who is still working on boats in Sawley.

I was able to track him down by phone and had a quick chat - I then sent him a few photos and got this response back, which has filled in the details of Tortoise's first twenty years of existance, before Jim & Mary, the previous owners, bought her at Alvechurch in around 2000: 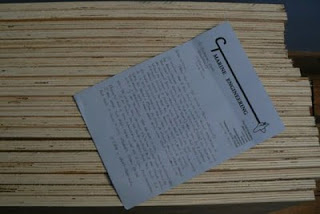 I confirm that a hull only was built around 1978/9 for a Mr Harry Hanson who lived in Lyndon Road, Solihull. The boat went down to the Black Bouy Pub & Club near my boatyard at Knowle (now Goldsborough Boats). Harry then put a wooden cabin on - which was fairly normal for the time - and boat club members fitted a 4 cyl petrol engine for him.

Harry owned the boat for 10 years and a steel top was fitted by Black Bouy Club members before he sold it, and I fitted at 1.5 BMC diesel engine about 1989. I then built a 30' NB shell with a BMC 2.2 diesel at Knowle around 1988 - Harry died round 1999? Many happy hours were spent on Lyndon with wife & two daughters.

I am delighted that the boat is still going and overplayed etc - the original hull was only 3/16" or 4mm to keep cost down etc.

Also on the phone John had confirmed is was a hull designed for river use as much as canals - I've been told the fact that the prop shaft slants down (rather than being horizontal) is a typical sign of this previously. I'd always suspected the BMC wasn't the original engine, too.

John said he'd just moved, but if he finds any original paperwork or photos he'll pass them on - it would be fascinating to see the original wooden top version, too.

I don't know what I expected to find when I looked up Harry Hanson online, but he - or someone of that name - has written a couple of (possibly quite academic) books about life working on canals. I've found one to buy s/h on the net and await it's arrival.

It's also important I think to know the original name of the boat - Lyndon. I'd known this was the name of the boat when boat by Jim & Mary, but had assumed that was from the previous owners names - Lyn & Don - don't know where I got that from now. Being named after the area that Harry lived in seems fine & respectful, and had I known I might have restored that name.

It's all a bit strange, a bit like finding a long-lost relative. But lovely.

How lovely to discover your boat's past, especially to know that others took such pleasure in Tortoise too. Makes me want to find out more about my own boat.
Carrie

The Black Buoys club still exists,its not SG boats but the cub opposite the Black Buoys pub so they may have records of members etc.

How lovely to find out more about Tortoise - long may she cruise!

Am just catching up with blogs so I hope that you and Carrie are well. We may come West for Christmas Shopping - maybe we can contrive another winter day cruise with you....

a belated reply, sorry, but yes, do shout if we can join you again somewhere, we'd both been saying recently how lovely a day that was. It doesn't have to be within walking distance, too... ;-)