You don't have you be mad to work here...

One of the few things in Stratford not entirely based on some bloke who wrote plays ( or extracting money out of those here because of him) was another highlight of the trip - The Mechanical Art & Design Museum, full of various machines and automatons - imagine a particularly vivid dream after playing Mousetrap... 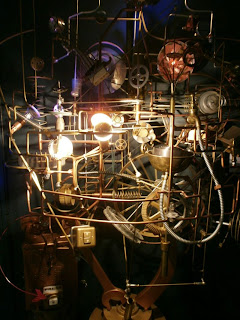 I don't seem to have taken any pictures of the various ball rolling machines (which were fascinating, and seemed far more complex & random than you'd expect), but a few of some more imaginative & inventive devices: 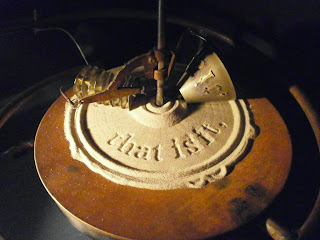 This one repeated wrote in the sand, and then wiped out what was written... 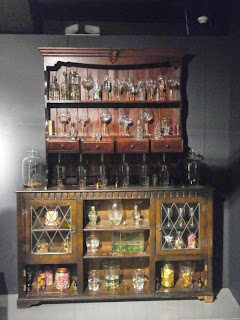 Carrie has a better picture of this, but it has the disadvaantage of also having me in it - each of the jars can be 'played' by hammers attached to strings, worked from a manual typewriter keyboard - in fact nothing automated about it, but a lovely, big, daft idea. 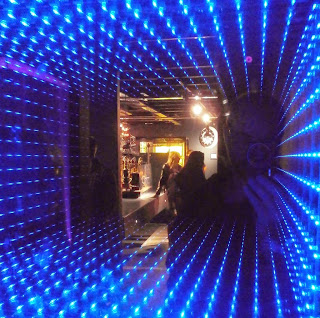 Having said that this one has me in, being hard to avoid, as it's an infinite mirror thingy with LEDs around the edge. 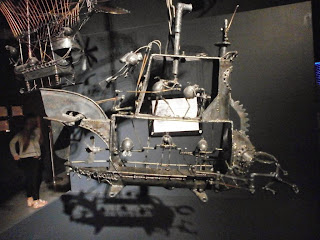 lighting is more theatrical than practical (although they do encourage photography, thankfully), so difficult to get clear pictures of some things - but this was part of a set of flea-powered machines, in theory, which very much reminded me of my friend Martin's song cycle 'Master Flea'.

it was a lovely, bonker, diverting (if noisy and chaotic) couple of hours. Also, at no point was blank verse attempted.

It was good to meet you a few weeks ago and thank you for helping us through the locks around Leighton Buzzard. Would love to catch up when you come back this way. my number is 07808 117558 and Mick's is 07505 379946 or our email is info@shadowsland.co.uk.Hope to catch up soon. Jo & Mick