Brentford - catch it while you can 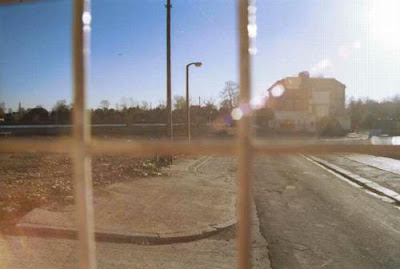 After exploring the alleys and back ways of Brentford by the river the other day, it occured to me how much change I've seen in the fifteen years I've lived here. I can't claim to predate the flats on the the Brentford dock estate (60s, built on the site of the railway/Thames interchange yard), but the picture above is of what is now the Ferry Lane estate, once the site had been cleared. The visible building housed Peerless Pumps in the past, is now a restaurant (although I'm not sure if that's still a going concern). In the nearly-canalside Brewery Tap pub (pool table, dogs welcome, folk & blues most evenings) there's an amazing overhead photo of Brentford from around the 1920s, which rewards careful examination - and now all that's left of Brentford's heyday is a little light industry on the south side of the High Street, long since earmarked (and indeed mostly bought up) for unnecessary redevelopment. Nothing wil happen of course until the developers think they'll get the most money out of it.

Now, they're discussing Brentford Lock West, i.e. the towpath side of the basin, where the visitor moorings and last remaining transhipment shed are. It'll be interesting to see how this affects the (very well used, as in nearly always full) visitor moorings, as canal boats sometimes seem to be the last thing people who buy canalside flats want to see.

On slightly more optimistic news, The Six Bells, the pub just to the east of the high street canal bridge has reopened after being closed for a few months, it's original 40s interior replaced by a fairly generic 'traditional' pub look. Haven't been in yet so can't comment on it personally (i.e. noisiness/telly, wifi, dog friendliness), but it's a Fuller's pub, so that's a start...

Fullers pubs often seem to be rather ersatz and soulless (and vast) - my experience generally being of canalside ones on the GU - which is a shame for a 'proper' brewery. But at least you can get decent beer - albeit at a price!

you're completely right about the dreadful abominations now scattered around the country, but we're very local to the brewery, so we have a few good little victorian pubs worthy of the name (and their bottled beer is generally vegan, but not the draft...).