The weekend's festivities started nicely with a few guests on the back deck of Tortoise at Iver; coincidentally a day or two earlier I'd fitted an 8w light at the top of the back bulkhead for the deck, complete with illimuninated switch inside (otherwise I'd end up leaving it on all night), so that proved it's worth. 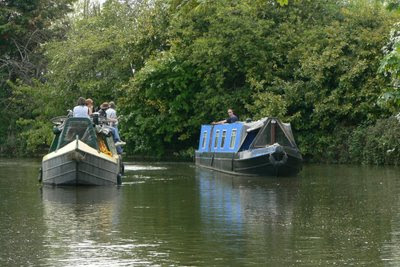 We left in the traditional convoy from Iver, which was great; I stopped off at Northolt to pick up Tess & Dave from their boat, while Catherine & Will on Benbulben was picking up Colin; then lunch at the Black Horse in Greenford. Stopping off at the supermarket on Ladbroke Grove meant I arrived at the basin itself in a bit of a queue, but not really worse than Llangollen last summer. 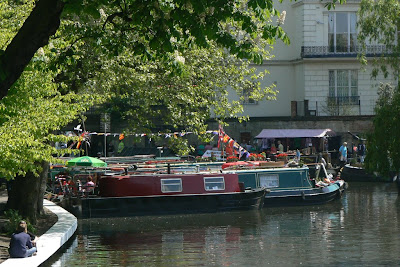 I was back on more or less the same spot as last year, with Jum & Mary on Heebeejeebee a few boats down, but with the bonus of Lawrence & Olivia, also from Iver, next door to me on Teazel, who I've known since I've had the boat but great to spend some time with them.

As I got into the basin, I saw friends snogging on the roof of their boat; tempted to heckle them, I didn't which was just as well as I found out later he'd just proposed, down on one knee and everything. So congratulations to Alex & Chris, thgere; in the 2nd hand book stalls later in the weekend I found them an old 50s/60s guide called 'The Way of Marriage' - what to expect in the bedroom, the works - which was duly handed over. I'm sure they'll find it useful. ;-)

Even a couple of days later it's difficult to remember in what order everything happened in. ;-) Saturday visitors include old friend Kate, teacher and itinerent musician for a catch up in the sunshine, and also Adam wandered over, who introduced me to Jo & Keith on Hadar, soon heading north for a coal distribution job, and also 'Eeyore' of Sonflower.

The evening was very serendipitous - Olivia had her grandfather's melodeon with her, I'd been teaching her a couple of tunes, as at the last minute I'd brought my mandolin. There proved to be a folk session by the boater's bar, so we joined them for the evening. Mainly played guitar in the end - accompanying three melodeons is a strange skill I'm at best out of practice at, but at least I never had to work out what key things were in - everything was in G. ;-) I also discovered my fingers are to fat for the chord buttons on a 72 bass accordion (having been used to a 60), that's my excuse and I' m sticking to it. I'm slowly getting back into session playing, but I do appreciate the instant community, a bit like being part of a church, or the masons, or something. ;-)

I was being fed a delcious sunday cooked breakfast by Catherine on Benbulben (partially escaping the inevitable running engines around me every morning - I was fine for power all weekend, thank you) when the boat handling competition was going on; not only did I miss one broken window and a few near misses, I also missed Tortoise's staring role as a fender. There's a few scrapes on her newly painted hull, but nothing I won't better in normally travelling anyway. I did get back to the basin to see Mike (another BBC engineer) doing teh circuit on Victoria, a working boat who's prow sits so high it's postively terrifying to see coming towards you.

Early afternoon I had another peruse of the book stalls and visited a few more of the Iver boats - meaning of course I was the worng side of the basin when the first of my evening guests arrived, who'd walked down the canal from Alperton (for fun, I should point out). We managed to fit in a suitable amount of drinking on the boat, then a trip to Red Pepper for Pizza and a pint in the pub opposite (the one with the low doors between snugs, I always forget its's name) before getting back to the boat for the illuminated boat parade, as surreal as ever.

Monday we waited fro Miss Matty to do their thing in the boat handling before sneaking out of the basin, only to find ourselves passing - on the left - the next boat coming in - it seemed the best thing to do in circumstances. Then on home with a crew of two friends and three small boys, the smallest of which couldn't actually see over the roof of the boat but insisted on having a go at the tiller anyway... we caught up with the others at the Black Horse again, but lost them when we started tying up boats as previously discussed...

I'm booked in again for next year. It's a great weekend, nothing too exciting, just a big social, really. Recommended, naturally.

I'd have come if I'd been in the country - it was ace last year!

have you forgiven me for not turning up yet? X